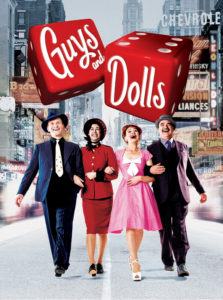 Don’t miss the ‘scintillating revival’ (Financial Times) of the highly acclaimed Chichester Festival Theatre production of Guys and Dolls in the West End.

This musical New York tale of gamblers, gangsters and nightclub singers will leave you ‘exhilarated’ (The Guardian), this is one feel-good show you won’t want to miss.

A cast and orchestra of over 40 is led by Sophie Thompson as the long suffering Miss Adelaide, David Haig as Nathan with Jamie Parker reprising his terrific Sky Masterson and Siubhan Harrison as the pious Salvation Army sergeant, Sarah Brown.

To enter online send us your name and phone number in an email to marketing@ginaconway.co.uk or pop into one of our 3 locations.

Terms and conditions apply. Subject to availability. Prize is valid for Monday – Thursday performances until the 29/02/16, excluding performances between the 18/12/15 and 06/01/16. Prize is as stated and cannot be transferred or exchanged.